Racing games have been one of the most popular genres for iPhone apps. The fact that a new racing/driving game for the iPhone pops up at least twice a month on the App Store bears testimony to the constant popularity of this niche.

There are tens of thousands of iPhone gamers out there who have, at one time or another, dreamed of finding themselves behind the wheel of a sleek sports car, roaring down the track at more than 200mph while trying to avoid crashing into the wall or sideswiping an opponent. I wouldn’t be surprised if i found them on their phone trying their luck at www.cancasinos.ca in an attempt to raise money to buy a fast car.

The accelerometer in the iPhone actually lends itself rather nicely to turning your device into a portable steering wheel, and game developers have managed to take advantage of the iPhone’s capabilities to deliver visually stunning racing games that are a joy to play.

So if you’re missing out on enjoying the experience of playing a racing game or two on your iPhone, then you’ve come to the right place. We’ve prepared a short but sweet list of the three best iPhone apps that you can get right now, and this time, we’re focusing on racing games. 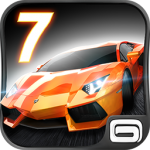 We’ve actually done a review for Asphalt 7: Heat [$0.99] in this blog, and we’re recommending it to anyone who hasn’t played previous installments in the “Asphalt” series. It’s an arcade racing game that’s immensely fun to play.

If you’re a jaded fan of Asphalt 6, you might think that the visuals and gameplay tweaks in the new version are not that extraordinary, but that’s to be expected from spoiled “Asphalt” brats. But for the newbie, the experience can be breathtaking.

There are plenty of cars and events to keep you occupied for a long time, and soon you will find yourself trying to squeeze in just one more race (or two), especially when you start racking up the championship trophies. 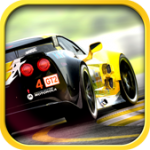 Real Racing 2 [$4.99] is generally lauded as the mobile equivalent of Gran Turismo, and if you’re a real gamer, you’d know that this is an impressive compliment indeed. This version carries significant upgrades to a game that’s already known for high quality visuals and gameplay, and should be on every gamer’s list of “must have iPhone apps”.

Adding to the game’s value is the great selection of 30 officially licensed cars, including the Ford Shelby Mustang GT500, McLaren F1 GTR Race Car, and Lotus Exige, to name just a few. You can also choose among a variety of control options to suit your driving style.

Start your career by racing against hatchbacks and whatnot, but don’t get impatient, because the better you perform in the lower ranks, the faster you can get to the higher-paying events and gain access to the faster, more powerful cars.

We’re very much aware that this game is more or less a year old already, but since this list is about the top iPhone apps for racing games, we feel that it would be an insult not to include Need for Speed Hot Pursuit [$4.99] and 5 reel driver slots game. Being a year older does not mean that this smartphone racer is sputtering behind the competition.

Chasing down bad guys while behind the wheel of a police supercar never gets old, and if that’s not enough, you also get countless opportunities to call for roadblocks, fire off EMPs, and lay down nasty-looking spikes just to help you catch your targets. Playing a racing game with vehicles that you can actually recognize is always a huge plus, and NFS Hot Pursuit does not disappoint.

Sure, you might have dreamed of driving a police car someday, but I’m willing to bet that your police department doesn’t have Ford GTs, Bugatti Veyrons, and Dodge Vipers in their carpool, right?

These top three racing games are some of the cool iPhone apps available on the App Store for whenever you feel the need for either a quick sprint down the road or an intense driving marathon through multiple laps. If you’re looking to get a high-quality racing game right now, these three are among the top iPhone apps we recommend.

We have more reviews for the best and hottest iPhone apps coming out every week, so keep posted! You can also check out the reviews we already have in the links below.